Final weekend before Footy takes control of our lives and we take a moment today to provide our thoughts on a structure for selecting your RUCKS for AFL Fantasy.

Traditionally most Fantasy Coaches hate selecting Rucks, and hate wasting money there. But even more than that we hate wasting TRADES across the Ruck line, which laid birth to the SET and FORGET strategy. Whether it was one or 2 rucks, there has been a history of locking in one or two reliable top scoring gun rucks and hoping they just play out the year and you never have to look at that position again.

At DTFML we would certainly not recommend taking 2 gun rucks into the start of the season, probably ever, but especially not this season. However for those of you adamant that a Gun is where you want to start your Ruck line, our thoughts are pretty simple… Lock in Jacobs, Mumford, Martin or Goldstein.

Martin should top score the ruck line once again this season, as he roams the field collecting possessions and tackles along side his taps. Jacobs is most likely to play every game and will be right up there at the end of the season for top scoring Rucks. Mumford might miss one or two matches due to rests to nurse his body through the long season, but he is a beast and GWS require him to throw his weight around, not only picking up the taps but some aggression and tackles and followup too. I expect him to be #2 average scoring ruck this year. And finally Goldstein who might not average as high, but loves the sole workload and is likely to play most if not all games as the sole ruck.

But to be honest, this year… we don’t recommend taking any Guns from Round 1… and here’s why:

This year more than any I can remember, there are Mid-Priced Ruck options galore! In Fantasy these players are low risk, as the guaranteed trades each week can be used to jump between them to get behind the ones who explode and score the best. Picking 2 mid-priced rucks will save you hundreds of thousands of salary cap dollars which can be pumped into strengthening the rest of your side. Most of the following mid-priced options will average from 65-80pts and increase in value enough to provide upgrades later in the season. Lets look at all the options:

Leuenberger ($277k) – Back from serious injury last season, and will fall straight into the Lions line up along side Stefan Martin. Leuey might see a lot more forward time (thats fine – Brisbane have no forwards) and kick a few goals which he may not have had the chance to in the past, while playing the 2nd ruck spot. Minimum average of 60pts in my book, and anywhere up to and around 80 makes him an almost lock for most teams.

Kreuzer ($244k) – Oh thats right he’s still firmly on our radar. Not for round 1… but he plays an important role this season when he returns from injury in about Round 6, and could act as the first downgrade of one of our mid-price rucks who has already increased in value. Kreuzer is ridiculously cheap once again thanks to returning from injury last season, and simply cannot be ignored. He is a lock as a dowgrade target when he returns.

Zac Smith ($366k) – Shown great form through NAB Challenge and re-affirmed his spot as the #1 ruck at Gold Coast after sharing this role with Nicholls in the past. Smith had 2 solid games of 81 and 84 pts this preseason and would be likely to average that through the start of the season also. Im all over him!

Scott Lycett ($410k) – Going at 86 pts per 100mins through preseason, he is firmly on the radar as West Coasts #1 ruck, as myself and many other WCE fans are willing to admit, despite the return of NicNat in the final NAB game. Lycett is being schooled and mentored by legend Dean Cox, has a good running ability to gather posessions around the ground and can play forward in the absence of Darling as another forward target. Most importantly, NicNat is a true unknown still and Lycett is becoming more and more reliable. Seriously consider!

Tom Bellchambers ($281k) / Jon Giles ($342k) – The Essendon situation is so interesting, with ASADA handing down its decision this Tuesday. We would be remiss to make a concrete recommendation before then, but one thing is true… if Essendon avoid further suspension, Bellchambers becomes their #1 ruck and at his price becomes a lock… and if he is suspended for a number of weeks… Giles becomes #1 ruck and is a lock! Both can average the 80pts we are looking for, so its almost wise to wait for the big decision and lock one of these boys in your side.

Brodie Grundy ($344k) – Looks like Grundy has locked the #1 ruck role down at the Pies now and should steadily increase his 60pt average from last season up towards 75ish. A 65 and 63 in the NAB challenge at 75 pts per 100mins backs up my thoughts and while he wont go big, he’d be a safe choice at this stage.

At this stage it is pretty clear that there are enough mid-price Rucks to choose from Round 1, with low risk, using a trade in the first few weeks to get the choice right and switch between them to have the 2 mid-pricers who are locked and scoring for their teams the best. Both mid-price rucks should be rising in value enough to downgrade one to Kreuzer, and possibly upgrade the other to a gun around Round 6 or 7.

My personal pics… Can’t go past Leuenberger and probably Zac Smith to be honest after his solid preseason. Whoever is the bombers #1 Ruck would be the next closest to finding a spot in my team, with the only thing stopping me from locking Bellchambers or Giles in being the fact that we just havn’t seen a real Bombers team for this season and wont until Round 1 when the ASADA announcements have been made and finalised.

WHAT ABOUT THE BENCH?

Hmm.. Its probably the worst year ever for Ruck bench options.

A few people have floated starting with a very cheap Kreuzer on the bench, knowing he will be back in a number of weeks and can act as backup then. But why would we do that when we can downgrade to him and free up some cash when he returns! This allows us to upgrade our other ruck to a Gun before the Byes!

So we see 2 options:

1) a 3rd mid-pricer to raise more value – It’s possible that a 3rd midpricer on the bench, providing backup and also rising in value could be a worthy option, someone as cheap as Bellchambers if he plays or Leuenberger even. The problem with this thinking is that a rookie in the fwd/midfield lines will rise in value far faster than a midpriced ruck. So relying on this to raise value for your team just isnt efficient.

2) 2 rookie priced hopefulls – unfortunately its the best of all options. There are a number of clubs with backup rookies who with a bit of injury to their #1 ruck, might see a youngster get the call up. Most likely options are Phillips at GWS, Naismith at the Swans, O’Brien at the Crows and Hannath/Griffen at Freo. But I wouldnt be relying on them to play, or score. They are just the most likely of a bad bunch.

Sitting beside either of these options in the R4 spot we really just dont want to be investing too much money, and a $120k no-hoper like Cox, Holmes, Nankervis are the best of a very terrible bunch. Probably better off taking 2 of Phillips / Naismith / OBrien / Griffen to be honest.

Either way, what you need to do in this case is not rely on the bench to cover injury, and instead be using the weekly trades available in Fantasy to swap your mid-price rucks around if necessary.

SHOW ME THE CHEATSHEET!

You all know there is no right or wrong, and I’m sure there are many of you who wish to take a Gun Ruck, but we just can’t recommend it in a year where there are too many mid-price value options.

Here is how we see it going into Round 1… with Kreuzer as a mega downgrade target somewhere around Round 6 when he returns, and Jacobs/Martin/Mumford as my first upgrade target. 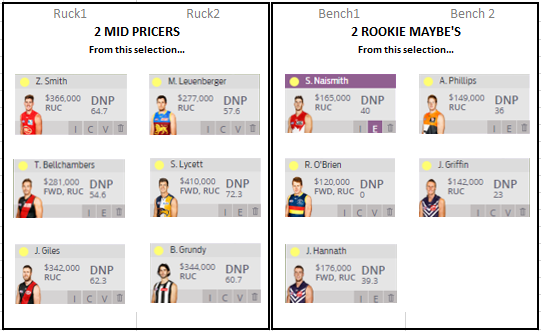 And it looks something like this in my team:

You can play with your team right now in AFL Fantasy at http://fantasy.afl.com.au