Who are the rookie defenders to pick in 2015?

Last year we recommended slotting Luke McDonald and Kade Kolodjashnij into your backlines and they pumped out a tidy 65 and 68 pt avg for the season, jumping up past $350k in the process. Some teams held McDonald right to the finals, further highlighting the need to nail your rookie picks to start the season.

Fantasy of course gives you the extra trades to correct a few left field rookies that out perform, but we cant be so flexible in the Real Dream Team so information on rookies becomes gold.

So you’ve heard some names, seen some people bander around draft teams… but who are these Rookie defenders that people are talking about, and who are the ones we should be keeping our eyes on? 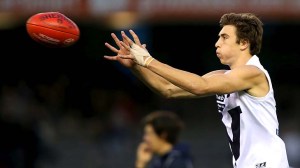 The number 6 draft pick comes with a hefty price so he’d have to really be worth it to make our fantasy teams. Marchbank won All-Australian honours in the 2014 under 18 champs as a genuine key defender, averaging 74 DT points per 120mins, and a similar output in the TAC cup with a 69 pt average. Is that enough to warrant a pick in our Fantasy teams? meh. maybe. probably not. He is a genuine defender, so not much chance of running dash through the midfield or up on the wing, so with that and his hefty price, and a few junior injuries (back and knee), the top drafted defender probably just isn’t a lock at this stage, or even in my draft team. Watch, but most likely a pass. 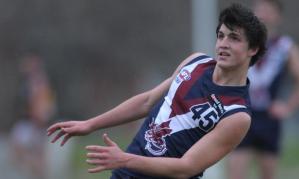 Pick 30 in the draft, Maynard is actually an inside midfielder who has a junior history of going forward and kicking goals. Hang on – you said rookie defender? Forget the position and enjoy the fact we can pick him in defense. Averaging 22 disposals and 100 DT points in the TAC cup and demonstrated his speed, a great kick, plenty of scoring shots, contested possessions and tackles through the under 18 champs for a 92 pt DT average per 120mins. Will probably not play from Round 1, but expect him to get some games and if he does, I’d love to have him in my team! Definite watch to see how he can get a spot in the Pies best 22.

Goddard, cousin of former Saint-now-Bomber Brendon, is a swing key defender/forward who for some reason we can pick as a def/mid DPP. He has always been most impressive down back, especially one-on-one, and especially in the air. While he played key forward at the 2014 Under 18 champs, he struggled and faded out of games considerably. Think we should leave him alone if the Saints play him forward, but if selected down back, which he should be, he should average 60+, and for his price he needs to. Watch through NAB cup and more likely a DT pick over Fantasy.

Dick has moved to Carlton after time in the NEAFL playing for the Swans for 2 years. He was noted as quick and runs as a rebounding defender across the wing, adding some pace possibly to the Carlton lineup. Look, he’s cheap, and an article on Carlton’s homepage entitled “Matt not here to make up the numbers” was very positive towards him breaking into the Blues lineup as a rebounding defender. It’s gonna make a few put him on the bench, but he has never shown a great deal from a fantasy perspective. He could slot into our last bench spot.

VW, as we are sure to know him as, is a 3rd tall defender who racks up the intercept possessions, averaging nearly 20 disposals a game in the TAC cup last year. He is a likely type for Fantasy, and to break into the Kangas team at some point this year. Maybe not a certainty for round 1, but my bet is we will be cheering on VW some time this season. Wait for him to be named and get on board.

A few to watch, but no certainties like years gone by.

Other top defender draft picks – Darcy Moore and Sam Durdin are tall key defenders who are not typically fantasy relevant. Jake Lever missed 2014 with injury and while he demonstrates great leadership and is a possible Fantasy pick, he isn’t likely for the start of the season either.

What about some cheapies who didn’t break into their teams last year then? Yep, there’s a few… but nothing to get excited about yet…

Last year we talked about him being a rookie lock… if he can get fit… but foot injuries held him back and he never made it onto the park. Scharenberg is a utility who reads the play well, can play any position and dominated back to back years of the under 18 champs and has already played at SANFL level as a rookie. But preseason reports say he is still struggling to get back from injury. If he does… ill say it again… lock him in… the Pies will want him to play! But at this stage he seems like a possible downgrade target later in the season and not a starter.

Recipe for success – mature age running halfback, 5 years in the SANFL level, averages 66 DT pts, high kick to handball ratio. But didn’t get a game for the Bulldogs last year, and as they play their youngsters, his chance might be gone… or is it. Keep in the back of your mind in case he gets a game.

Another option who actually debuted last year for the Swans is Zak Jones, the tackling machine who can find his own contested footy. He played 4 games for the Swans and will continue to find it hard to break into the team, but is our best shot at a Fantasy relevant, rookie priced gun to play and score well! Better suited to Fantasy where he is only $142k, but in DreamTeam, the cheaper rookies might be a better option. Definite Lock if he breaks into the Swans team.

Finally Kristian Jaksch is another I’ve seen banded around on Fantasy websites as an option. Jaksch actually played 2 seasons for GWS at both ends of the ground, averaging 35’ish. Seriously this kid isn’t a Fantasy pick, so unless he shines, stay away.

So… um… that didn’t really help much!

Sorry to be the bearer of bad news but there just isn’t a lot of rookie defenders screaming out for us to pick them in 2015. There certainly isn’t any locks like previous years, and that makes it difficult.

SHOW ME THE CHEATSHEET!

Click on the empty templates below to load our draft defense with the rookies placed where see them being picked.

(click above to see where we place the rookies)

(click above to see where we place the rookies)

You can play with your draft team right now in AFL Fantasy at http://fantasy.afl.com.au

Error: Twitter did not respond. Please wait a few minutes and refresh this page.