Well the 2014 prices and positions have been revealed, so here are some notes on the lock-in players you can build your team around for the 2014 season. Unless one of these 7 guys breaks their legs in the NAB cup, they are an absolute LOCK IN for our teams here at DTFML.

A Team Planner with the 7 players in their positions is at the bottom of the article; or click below. 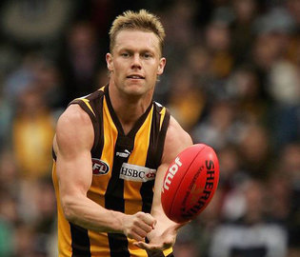 Sam Mitchell is a genuine midfielder who pushed back in the absence of Suckling and Birchall to win 50% of his disposals coming off the backhalf last year, but may be allowed to return into the midfield only now they are back. He is a ball magnet, averaging 25+ posessions in his last 9 seasons!! His last 5 years of DreamTeam scored him an average of 102, 101, 112, 102 and 96 last year. The reason he is a lock – he can be selected as a defender. Mitchell is a premium midfielder in your defense, similar to Gibbs, Heppell and Goddard last year. Lock him in as your first picked defender. No questions asked. 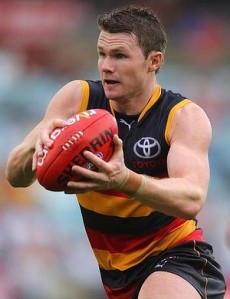 Danger is a weapon bursting out of the midfield but in 2013 he proved he can also be a weapon in front of goal, playing forward more often, kicking 31 goals, with at least one goal in all but 4 games. With the interchange rotation rules in 2014, expect him to head forward again for a ‘rest’ which wont hurt his scoring. He averaged 99 DT points last year to back up the 102 pts in 2012. But with the loss of our dual position forward/mids like Stevie J and Rockliff, Dangerfield steps in and should be your first picked forward. Once again… no exceptions. Lock him in.

Dane Swan needs to be the first person you pick in your DreamTeam. He will most certainly be your dreamteam captain most weeks, if not all weeks… and his price is irrelevant. Yes… I am saying he is still the most important DreamTeamer in the game. He has totally dominated DreamTeam scores for the past 5 years, and is easily the most important person you will pick in your team. In 2013 he had the most disposals in the competition and averaged the most per minute on field, as well as being the 2nd highest DT scorer for the season. His past 5 season averages are 119, 123, 121, 134 and 117 last year. Every year people dont pick him because he costs too much – Nek Minnut … Swanny pumps out back to back 130’s, proves he is the greatest dreamteamer once again and everyone wastes 2 or 3 trades trying to find the money to trade him in. Save Yourself The Hassle !!! LOCK HIM IN FIRST.

Here at DreamTeamFML we call him Zeus for a reason… Gary Ablett is a DreamTeam God! Once again he had a stellar season, as the 3rd highest DT average of 115 pts, and resting up forward didnt hurt, with 28 goals! God forbid he keeps up his forward time (now that GC have midfielders like Bennell, Omeara and Jack Martin), he might even become a mid/fwd for 2015…. OMG! His past 5 seasons he averaged 119, 119, 112, 125 and 115. There is no more explaining needed… LOCK HIM IN SECOND.

Once again, with the loss of Stevie J, Rockliff and co from our forward options, we are lucky to still have midfielders like Dangerfield and Dustin Martin as dual position players that we can lock in up forward. Of eligible forwards this year, Martin’s 97 pt avg from 2013 ranks 3rd only behind Riewoldt and Dangerfield. We know he can go big, with a top score of 144 pts last year. With Richmond growing as a club, and Martin now 22 years old, he is only on the up. Lock in Danger and Dusty side by side and build your forward line around them.

Matt Suckling – Return of the Sharpshooter

Despite returning from a 2013 season ending knee injury, Suckling is clearly in the Hawks best 22 as the rebounding defender/winger who drives the Hawks into attack with pinpoint precision kicking off that lovely left boot. He will return to the team this year carrying a significant discount thanks to his injury. He averaged 91 and 83 as a defender in 2011 and 2012, and in this time was the Hawks 1st for rebounds, had the 2nd most marks, 3rd most uncontested posessions and 4th most disposals. Not to mention how exciting it is as he unleashes his left boot from 55m and slots it through for a goal or two. He is a DT favourite to watch, with proven scoring background, and only $315k’ish (priced at 58 pts) which is about $150k discounted on his expected output. Lock him in, and unless he re-injures, he’ll be there all year for you.

How does it look?

Here’s a taste of the start of a solid team structure:

: Login now at http://afldreamteam.virtualsports.com.au to start your DreamTeam planning like we have.