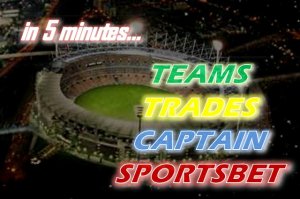 Welcome to ROUND 8 and with only a few hours to bounce down, here are all of our TEAMS, TRADES, CAPTAINS and SPORTSBET for the week! Lets start with heaps of DT relevant In’s and Out’s…

Buddy – Despite a few good games (100+) earlier in season, Buddy has had 3 shocking weeks seeing his value drop drastically. Not only is he cheap… he plays GWS, GC and Melbourne in the next 3 weeks, and as we all can imagine could pump out 150 dT pts easily this week. With a breakeven of 144ish, i think he might even make that and not drop another dollar. If you grab him this week, i think its a good call. If you wait one more week, you could miss a monster score, but there isnt much to lose by waiting because he will certainly not cost more next week. Our call… Wait 1 more.

Portletts – Heath, Neade, Wines, Stevenson, Pittard… offload them all. My last 6 trades have been Port players but for those who are still hanging onto a few, it is certainly time to bail. Unless you have bad injury problems, i think your two trades should prioritise replacing with an upgrade or downgrade, the Port rookies.

Lonergan – This big rookie might have started with 2 scores in the 50’s, but an interview this week confirmed he has been playing a little bit forward and expects some more midfield time now where he can get his hands on the ball. He tackles like a DT professional and Id be expecting a 70-85 pt average over the next few weeks. Yep, downgrading Wines to Lonergan could be a brilliant option!

B.Kennedy – The Magpie rookie forward is on the bubble and is named on the ground for the Pies this week in the forward pocket. With injuries galore, the Pies cant afford to start dropping players like Kennedy so expect him to value up over the next few weeks. At $102k, he is also a very cheap rookie option.

Kerridge / Vlastuin – Both rookies have priced up already this year, but both pumped out 100+’s last week, still have negative breakeven scores and are set to explode in value over the next fortnight still. If you missed them, its not too late, but this week is probably your last chance!

Gibbs – Why do you still have him?

There are certainly a few other options out there this week, with Dusty Martin and Patrick Dangerfield both tempting owners to put the C on them, after a couple of big 140+ scores, and with Martin coming up against Melbourne. But a captain MUST be a reliable big score, not an off chance one, so I simply cannot recommend either. Nor Stanton who is just coming back, or Mitchell who plays GWS but didnt go big against them last year. Stevie J seems more relevant, and we can probably expect a solid 110 from him against the Pies, and makes my 3rd best choice for the week.

The two options in our mind are SWAN and ABLETT.

Swan will not be tagged. He will scored well. There is no doubt. His average for the year is higher than Abletts and he is also more consistent. If you want a very safe 110 – 120… he is your man.

Ablett is coming off a 130+ and is playing this week home at Metricon where he pumps out regular huge scores. He is playing the hopeless Bulldogs which helps even more, but he will certainly attract a Lower Tag and even if he breaks that, the Bullies might throw Picken at him. He should stay off the chain, and he should pump out a 120. But it comes with risk.

For this reason, if you are chasing a league win and feel you need an edge… Ablett could outscore Swan.

But Swanny is the safer choice, and he is my captain this week. 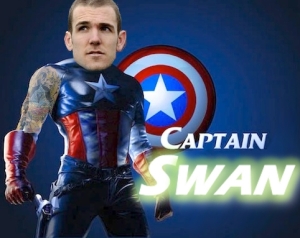 Some great opportunity for big multi bet wins this week. Combining the following results/margins with a 7fold, 8 fold and 9multi bet should pay out even if 1 or 2 of the results dont fall in your favour.

This gives you combined odds of $72 – 1. If you’re the responsible gambling type, feel free to:

and theres next weeks beers paid for, even if a game doesnt go your way.