Following our series of CheatSheets being posted here at DTFML, today we have the first upload of our PE Teacher’s Team for 2013.

It includes his complete team going into the 3rd week of NAB cup and a quick brief on each of his selections.
Hopefully it gives you some more to think about, to see how another one of our contributors is forming his team structure. 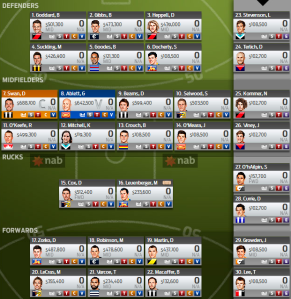 Bam there’s another bloody awesome team and I cant wait to see what changes you make and what you pump out for Round 1.

Stay tuned for more Teams, Cheat Sheets and Rookie Advice as we approach the end of the NAB cup.