Today we have the first upload of Glenn’s Team for 2013. Feel free to steal it, use it or even laugh at it, but at the very least learn from it and work with it as you mould your own team in the weeks ahead.

It includes Glenn’s complete team going into the 3rd week of NAB cup and a quick brief on each of his selections. Hopefully it gives you some more to think about, to see how another one of our contributors is forming his team structure. 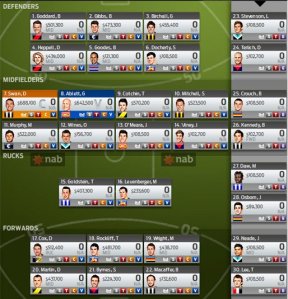 This team will probably change a few times before round 1, but thats where it sits right now.

Overall its another really strong team and I cant wait to see what changes you make and what you pump out for Round 1.

Stay tuned for more Teams, Cheat Sheets and Rookie Advice as we approach the end of the NAB cup.